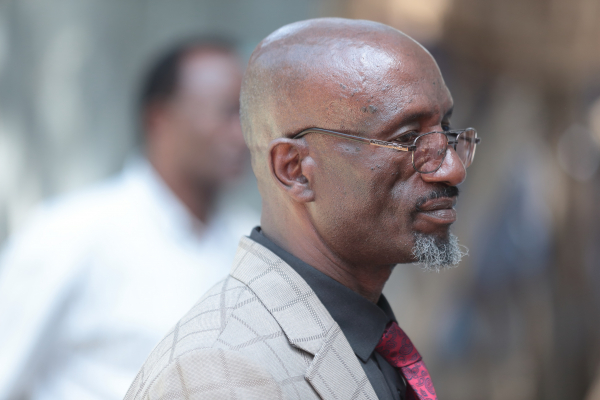 Lieutenant Yishak joined the Ethiopian military at the age of 16 and served his country for 17 years, fighting in both the Eritrean War of Independence and the Ethiopia-Somali Border War in the 1980s and 1990s.

Because of a change in government, he was discharged from the army and was left with nothing. Despite many hardships, he managed to go back to school and graduate.

“At that time, I suffered a lot. I had no money; I was a grandfather in comparison to my fellow students and my peers were already successful,” he says.

Within a year of his new job, he was conscripted back into the army to fight another war and stayed for another ten years. It was during this time that he rose through the ranks to become a Lieutenant.

Approaching his fifties, Mr Yishak discovered he was HIV positive in 2008, after he divorced and started having problems with his health.

“Military men don’t have hope. They don’t place value on themselves. Only after a long time do they get a pass and there is little time to visit the clinic. When soldiers come to the recreation centres, they want to enjoy themselves,” says the Lieutenant.

Now, at the age of 61, he runs the Medhin Association of Elderly People Living with HIV, a role he executes with the military precision of a serviceman. “The military taught me many lessons,” he says. “I am able to challenge things in every way. My management of Medhin comes from this experience.”

Medhin provides small grants to elderly people living with HIV who use the grants as catalytic funding to generate income, build small businesses and change their lives. Many of them lost husbands, wives, homes and incomes when they were they were diagnosed with HIV.

When Mr Yishak was diagnosed with HIV, he immediately started HIV treatment and tried to convince his wife to reconcile.

“I didn’t want her to feel scared, so I suggested we test together, and I treated our HIV test as my ‘first’, so we would find out our status together. She also tested HIV positive and started treatment. I feel that if she hadn’t come back to me, she may have died,” he says. “Now we live in love and have three beautiful children,” he adds.

Mr Yishak has witnessed the confidence that Medhin has built in elderly people living with HIV. He believes they live a better life as they do not depend on others for income and they learn to better manage all aspects of their lives. Most importantly, being part of the association gives them hope and dignity.

“Medhin is a light for me,” says Mr Yishak. “It is a collective addressing the problem together. We live for each other and the community, not for ourselves.”

*Medhin is supported by UNAIDS and the Italian Agency for Development Cooperation in Ethiopia, through the Community Health Education, Capacity & Knowledge Building project. The project is primarily designed to strengthen institutional capabilities through training, mentoring of people living with HIV and other community-based organizations for planning and implementation of programmes on communicable diseases, HIV, gender-based violence and income-generating activities. The project focuses on selected groups such as women living with HIV, elderly people living with HIV and other at-risk populations such as prisoner inmates and employees of mega-projects.

More in this category: « Scale up combination interventions in order to reach zero new HIV infections Giving birth to a healthier generation »
back to top