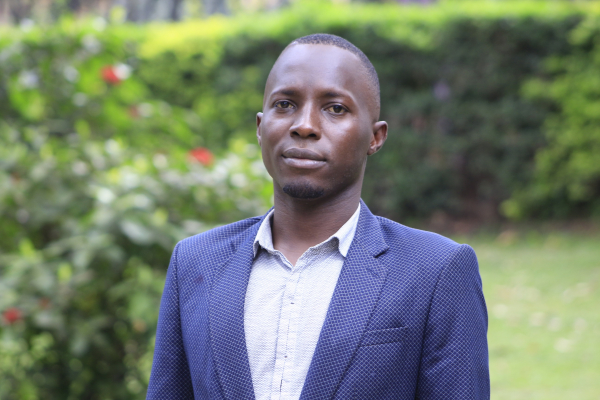 Giving birth to a healthier generation

Kintu Kenneth is a 26-year-old young man from Uganda who works as a Head of Programme for Africa Young Positives Network (AY+), a network of young people living with HIV across Africa. He became involved in activism in 2012 when he was just 19. UNAIDS sat down with him to understand his journey as an AIDS activist, what keeps him going and his vision for the AIDS response in Africa.

“After I finished my form six, I joined an organization in Uganda called Reach A Hand where I was a peer educator at different schools and communities distributing condoms and teaching people how to use them. We also trained young people in schools on issues of sexual and reproductive health rights, such as unintended pregnancy and hygiene.

I know exactly what motivated me to become an activist. One day I visited my uncle’s house, who is a pastor, and found a cousin of mine, Caro, to whom I was very close, locked in a room. I opened the door to see what the matter was and she ran away without speaking to me. I later learnt that she had been locked in the room for an entire day without food after being beaten by her father because she was pregnant.

Her absence lasted two weeks before she came back home crying and bleeding. My uncle was called home. He came back and started shaming and beating her again without listening to anyone. ‘The devil is back,’ her father exclaimed as he kicked and punched her. He said he was worried about what he will tell the church as his child was pregnant at the age of 21 while still at school. In Uganda when a young woman gets pregnant while still at school, they are discontinued.

I was very young then, I could not stop my uncle, neither could his wife. Caro’s condition became worse and she started vomiting. She was rushed to hospital where it was discovered that she had poisoned herself and was losing blood from an unsafe abortion. She was also found to be HIV positive. I still remember my cousin crying saying, ‘Doctor please help me. Save my life. I do not want to die young.’

I watched her die. This was a painful experience for my entire family, especially because we also needed to raise money for her body to be released from hospital and for her to be buried, as her parents could not afford it.

I do not blame my uncle; he was not equipped as a parent on how to deal with sexual and reproductive health. However, from that day I knew I needed to do something so that no other girl suffers the same fate as Caro, even though I did not know exactly what to do.

Hamphrey told me that the only way we can prevent young women like my cousin from dying is if we give adolescents and young people the necessary information on sexual and reproductive health through peer education. This is how I started as a peer educator in schools, communities and churches teaching people about these issues, including how parents can be better equipped to deal with them.

I joined AY+ as a Programme Manager and supported the Communications and Advocacy department. When I joined, it had four networks of young people living with HIV in Africa. One of my roles in the organisation is to create networks that are capacitated with advocacy skills and to build strong partnerships around Africa. Currently, AY+ has 23 networks in different African countries.

The networks have peer supporters, who are also ambassadors for young people living with HIV. They are stationed at health facilities to encourage other young people to get tested for HIV, adhere to treatment if found positive and to be aware of HIV prevention and sexual and reproductive services.

The Uganda network alone has around 40 000 members. They are trained advocates who are mobilized to strategic spaces such as meetings and consultations on health. They also work to create partnerships on the regional, national and local levels, advocating for parliamentarians and governments to change discriminatory policies and to prioritize the health needs of young people. This is what keeps me motivated to do what I do.

When I joined AY+ I tried to look out for strategic partners who would support me in my advocacy work. My boss introduced me to a UNAIDS Youth Programmes Coordinator, Ruben Pages, who was in Geneva at the time. He introduced me to several UNAIDS country offices which opened their doors to us. They gave us technical support and introduced us to other partners that could support AY+ capacity-building efforts. UNAIDS continues to support us through capacity building and training.

I will be happy to know that even when I am no longer at AY+, I would have supported a system that is going to keep young people motivated in the AIDS response. In that way I would have contributed towards Ending AIDS in our generation.

I advocate for young women like Caro on the country level, on the African continent and beyond. I see myself becoming one of the global influencers that other young people can learn from—that life is not about money if you can save another Caro from dying.

We are the current generation of young people and if we access the information and health services we need, we are most likely to give birth to a healthier generation.”

More in this category: « The military man turned community activist Revitalisation and capacity building for civil society in Zimbabwe »
back to top