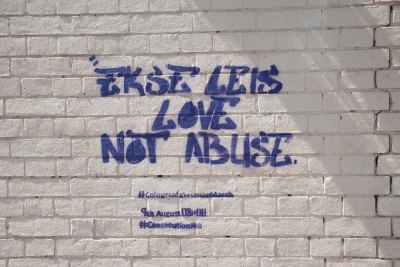 “I say, let’s love not abuse”: a mural in inner-city Johannesburg, South Africa.

From torturer to saviour

I say to men: ‘I went to test. I know my status. If you want to go and test, go test. You will still live. As long as you are taking your treatment’.
Shepard Dlamini

Shepard Dlamini is a shining light in his community. He lives in Diepsloot, a densely populated township north of Johannesburg, where he is known for offering refuge to women who need to escape their violent partners.

Shepard says he feels a strong sense of empathy for them. “Women come running to my house. Sometimes their clothes are torn or they are even naked. I will assist them,” he says. “I have to call the police. I will take their pain into my heart; as if it were happening to me or my sister. I will try to help them. I just want to see them out of that abuse or violence.”

He admits he was not always this way. “I used to drink a lot and when I drank I used to be violent, especially to women. You would find that I am pulling and tearing women’s hair in the street. People would just look at me and do nothing because they were scared of me. I was that bully who didn’t want to listen to anyone,” he says.

Things changed when he was chosen to serve on the local community policing forum. “I tried my bully style there,” he says, “but the code of conduct was binding me and I didn’t have the power I used to have. So, I had to change in order to work with the rest of the team.”

He also gave up drinking, a step he regards as central to his transformation.

Shepard is a member of the Community Action Team, a group of peer educators trained by Sonke Gender Justice to raise awareness in the community about gender-based violence, gender inequality and SRH.

One aspect of Shepard’s work is to educate people about HIV prevention and treatment. “I say to men: ‘I went to test. I know my status. If you want to go and test, go test. You will still live. As long as you are taking your treatment’.”

Shepard says he plans to keep changing until his wife takes him back so he can live with her and his twins. “I realize that there is life if you change,” he says.

More in this category: « The formula for a happy family How to build a man »
back to top