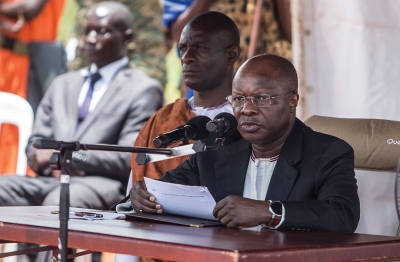 As a young man, it is my duty that my voice gets heard by the young men and boys so that they can hear my message, because people do look up to me. They see me as a fellow young man. They will respect the message.

Men are being left behind in the AIDS response in eastern and southern Africa. “We have found that men don’t engage fully in HIV prevention and treatment, for a variety of reasons. This not only affects their own health, but also quite critically, the health of their partners and families. The failure to reach men with HIV services needs urgent attention if we are to End AIDS by 2030,” says Catherine Sozi, Director of the UNAIDS Regional Support Team for Eastern and Southern Africa.

Men are much less likely than women to test for HIV or be initiated into treatment if they test positive. Health-care systems have evolved to prioritize women’s health because it has been an efficient way to improve HIV prevention and reduce new HIV infections. Because of this female-centred service, many men and boys may find health services difficult to use or not male friendly. Some men also believe it is a weakness to admit that you are not well and wait too long before getting help.

Reaching men with HIV testing and treatment services requires innovative approaches. One such approach is to work closely with cultural leaders, who can influence the norms, beliefs and customs that affect access to health-care services and can reach the people government and civil society cannot.

As the world’s youngest reigning monarch, 25-year-old King Oyo, Omukama of Toro, Uganda, speaks out about HIV prevention. “If my voice is heard by young people from my kingdom, talking about ways to prevent HIV, that is important,” he says. He takes his role as UNAIDS cultural champion for HIV and AIDS among young people in eastern and southern Africa seriously. “As a young man, it is my duty that my voice gets heard by the young men and boys so that they can hear my message, because people do look up to me. They see me as a fellow young man. They will respect the message,” he says.

The reigning Kabaka or King of Buganda, Ronald Muwenda Mutebi II, has also teamed up with UNAIDS in a campaign to get men to access HIV counselling and testing as a gateway to HIV treatment and care. The king is UNAIDS National Goodwill Ambassador for male engagement and ending AIDS in the Buganda Kingdom, which is situated within Central 1 and Central 2—two of the highest HIV prevalence regions in Uganda.

Gwanga Mujje means “make a loud noise” in Luganda, the language most widely spoken in Uganda, and is also the name for the alarm drum that warns people in the event of an emergency. The Gwanga Mujje: One Million Men invites men to join women and children by getting tested for HIV and get treatment if they need it. The hope is that men will continue to pursue health-seeking behaviour once they are initiated into the continuum of care.

Many local partners in Uganda agree with the approach of engaging cultural leaders to encourage men to seek health care services. Says Lydia Mungherera, Executive Director of Mama’s Club: “We have always believed in working with community gatekeepers, such as cultural and religious leaders, elders and local political leaders to come in and talk to men. We find that men are much more open to the message from respected and trusted leaders.”

More in this category: « How to build a man Doing it by the book »
back to top