load more hold SHIFT key to load all load all 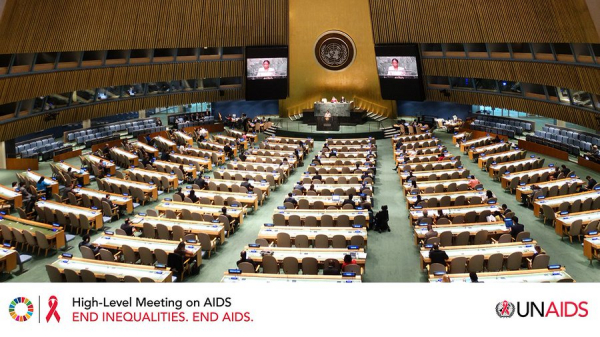 The 2021 United Nations High Level Meeting (HLM) on AIDS took place at a historic time, exactly forty (40) years since the first HIV case was defined and 25 years since The Joint United Nations Programme on HIV/AIDS (UNAIDS) was created. The HLM is an important event in the calendar of UNAIDS because it provided opportunity to review the progress made in reducing the impact of HIV since the last HLM. During the HLM, new, bold and ambitious political declarations were adopted that will shape our course of action in the AIDS response.

In his opening remarks, the United Nations General Assembly president Volkan Bozkir said, “the tragic reality is that the most vulnerable are the hardest hit by HIV. They are at greatest risk of being left behind as AIDS remains not just a health issue, but a broader development challenge.” He added, “AIDS is an epidemic of inequalities. If we are to end AIDS by 2030, we must end inequalities. In this decade of action, if we are to deliver the 2030 Agenda for sustainable development, all member states must re-commit to ending the AIDS epidemic by 2030.”

The HLM brought on board governments, civil society organizations’ leaders and influencers, stakeholders and activists involved in AIDS fight. The event was a culmination of several months of dialogues held with different stakeholders across different regions of the world. And it confirmed that all the voices of different communities were heard and even those who are most vulnerable and marginalized were represented in the conversation. As a representative of the activists and young voices, Yana Panfilova of Teenergizer said, “We took to the streets and meeting rooms to get laws and policies changed. We fought sexual and reproductive health rights and comprehensive sexuality education. We fought to be heard because there is nothing about us without us.”

During the event, the general assembly of the United Nations adopted political declaration on HIV and AIDS themed: Ending Inequalities and Getting on Track to End AIDS by 2030. In a rejoinder, all the global leaders agreed to reduce the annual number of new HIV infections to under 370 000 and AIDS-related deaths to 250 000, eliminate new HIV infections among children, end pediatric AIDS and eliminate all forms of HIV-related discrimination by 2025.

The leaders also committed to providing life-saving HIV treatment to 34 million people by 2025. The political declaration under-scored the importance of all countries to aspire towards achieving the 95-95-95 targets which outline that—95% of all people living with HIV to know their HIV-positive status, 95% of the people who know their HIV-positive status to be initiated and maintained on treatment and 95% of all people on treatment to achieve viral suppression. This is a call to all countries to provide 95% of all people at risk of acquiring HIV within all epidemiologically relevant groups, age groups and geographic settings with access to people-centred and effective HIV combination prevention options.

Progress has been made in the HIV response. UNAIDS data indicate that in 2020, there were 37.6 million people living with HIV out of whom 27.4 million were on treatment, an increase from just 7.8 million people in 2010. Effective measures and rollout of affordable and quality treatment is estimated to have prevented 16.2 million deaths since 2001. AIDS-related deaths have fallen by 43% since 2010, to 690 000 in 2020. Progress in reducing new HIV infections has also been made but has been markedly slower—a 30% reduction since 2010, with 1.5 million people newly infected with the virus in 2020, compared to 2.1 million in 2010.

In full cognizance of two colliding pandemics, the leaders alluded to the fact that the impacts created by both on global economies and are tearing apart communities and reversing the gains made in averting AIDS-related deaths. As noted by Winnie, “The stark inequalities exposed by the colliding pandemics of HIV and COVID-19 are a wake-up call for the world to prioritize and invest fully in realizing the human right to health for all without discrimination.”

To fight the colliding pandemics, the leaders agreed to invest US$ 29 billion annually equitably and sustainably by 2025 in low- and middle-income countries. This includes investing at least US$ 3.1 billion towards societal enablers, including the protection of human rights, reduction of stigma and discrimination and law reform. They also committed to include peer-led HIV service delivery, including through social contracting and other public funding mechanisms. The leaders committed to ensure global accessibility, availability and affordability of safe, effective and quality-assured medicines and health technologies by taking advantage of the existing flexibilities under the Agreement on Trade-Related Aspects of Intellectual Property Rights (TRIPS) as provided for under the Doha Declaration on the TRIPS Agreement and Public Health.

In conclusion, the HLM was a resounding success and we express our gratitude to everyone who took part and contributed to this success. Special mentions to Namibia and Australia for their leadership and co-chairing the 2021 HLM and providing us with a springboard of action for the next five years.

More in this category: « Using a sports-based approach to secure the future of adolescent health
back to top