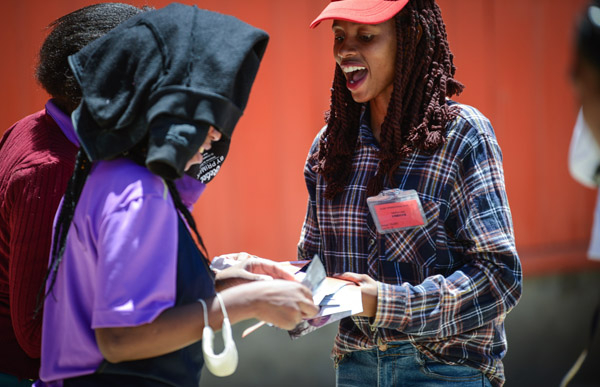 Involve young people in decision-making about their lives

“As a young woman leader, I always remember my 16-year-old self as a girl who needed access to a range of HIV-prevention commodities, but there were only male condoms available, and in very rare cases, pre-exposure prophylaxis.”

So says Nyasha Phanisa Sithole, an HIV, sexual and reproductive health and rights and gender activist from Zimbabwe.

“Already my choice is limited because basically there is no choice,” she says. “Then when I get to the health facility, the healthcare worker always has questions for me: ‘How old are you? What do you need condoms or contraception for?’”

“In my heart I scream. What has my age got to do with my access to life-saving HIV and sexual and reproductive health services? Where is the commitment to facilitate policy development and change? For years I have heard about the age of consent and how it must be changed so that I can access such services. For years I have heard conversations on decriminalising my sexuality, but everything remains the same and I continue to be vulnerable,” she adds.

Since the first United Nations International Conference on Population and Development was held in 1994, some progress has been made on furthering the sexual and reproductive health and rights of young people in the Eastern and Southern African regions.

The adolescent (10–19 years) birth rate has declined by 40% and the proportion of young women (20–24 years) who report having been married before the age of 18 has decreased by close to 20%, according to democratic and health surveys (DHS) and multiple indicator cluster surveys (MICS) from 2010 to 2018 conducted by the United Nations Population Fund (UNFPA).

Slow but steady progress on youth participation and leadership has been made. Only 1.5% of members of Parliament are young people below the age of 30 years in Africa, and only 16% under 40.

There is clearly unfinished business.

Young people face unemployment, food insecurity, discrimination, and daily infringements on their dignity by people in positions of power, impacting their health and wellbeing.

4 500 adolescent girls and young women between the ages of 15 and 24 in sub-Saharan Africa are infected with HIV every single week. 3 600 infections occur in the Eastern and Southern African region, according to the 2020 UNAIDS Global AIDS update.

Although adolescent girls and young women, in all their diversity, account for a quarter of new HIV infections, they only account for 10% of the total population.

Between 2013 and 2019, 35% of adolescent girls and young women in sub-Saharan Africa were married before the age of 18. Girls married before 18 years of age are more likely to experience intimate partner violence than those married after the age of 18, the report found.

Because of poverty, gender inequality, harmful practices (such as child, early or forced marriage), poor infrastructure and gender-based violence, girls are denied access to education, one of the strongest predictors of good health and wellbeing in women and their children.

Laws on access to sexual and reproductive health services for adolescents and age of consent to sexual activity in many countries do not adequately serve the needs of young people and even when they are progressive, they are often not well implemented.

The implementation of comprehensive sexuality education, despite ministerial commitments, remains uneven and inconsistent across the region.

Only one-third of adolescent girls and young women have comprehensive knowledge about HIV and sexual and reproductive health and rights.

UNAIDS, UNFPA, UNESCO, the African Youth and Adolescents Network, Restless Development and the African Population and Health Research Center conducted a survey of the impact of COVID-19 on young people aged 18–35 in the Eastern and Southern African region. It shows that the pandemic compounds inequalities and heightens the vulnerability of young people. They report that they are sad, scared, angry, frustrated and anxious at the world that they are facing.

170 respondents from 19 countries cited their main concerns as the disruption of HIV and sexual and reproductive health services; the accelerating risk of violence, abuse and exploitation; and loss of jobs and income.

COVID-19 is affecting their mental health, they say, owing to uncertainty about educational continuity, existing employment, and the economic impact of COVID-19 on their families.

In response to what they want to address these issues, respondents cite affordable mobile data packages or wi-fi hotspots to access online short courses, connect with their peers and access online counselling services.

Young people living with HIV have shown great resilience during the outbreak, delivering HIV treatment to their peers at home who can’t access health facilities; using WhatsApp groups to communicate sexual and reproductive health information and to give each other support; and even loaning each other medication.

When resilience is the only option for survival, our duty is to analyse the structural issues that force young people to have to dig this deep and address them.

While they survive against the odds, young people continue to be excluded from leadership positions and decision-making that directly affects them. 75% of the population in the Eastern and Southern African region is under 35, yet young people rarely hold political positions.

In late 2019, the SADC Parliamentary Forum Plenary Assembly adopted the Tshwane Declaration. It commits parliaments from across the SADC region to support meaningful youth engagement in matters that affect young people’s lives.

The declaration calls for enhanced partnerships that bring together parliamentarians, governments, civil society, youth activists, donors, the private sector, the United Nations system, and other partners to mobilise all available efforts and resources for action.

Through the #OurYouthIndaba partnership, parliamentarians from the SADC region and young people are engaging in a series of online webinars, advocating for the implementation of the commitments of the Tshwane Declaration. Discussions include how young people can influence parliaments through an” open door” policy.

Young people have the expertise. Inclusivity in decision-making must be the cornerstone in engaging young people in all issues that affect them, including their right to health.

This opinion piece was first published in the Mail & Guardian on 8 November 2020: http://bit.ly/3eC93TO

More in this category: « International Day of People with Disabilities Let the people lead if responses to tackle HIV are to be effective »
back to top