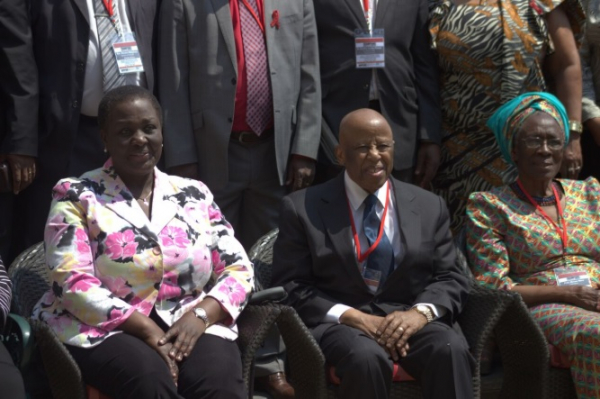 “Either we pay now, or we pay forever”: Champions for an AIDS-Free Generation convene high-level dialogue on AIDS financing

Despite remarkable progress in the AIDS response in Africa in the last twenty years, it will require even more acceleration and expansion for years to come. The success of HIV treatment in saving lives results in mounting financial obligations to maintain people living with HIV on lifelong treatment. Countries such as Botswana, eSwatini and Namibia have achieved the UNAIDS 90-90-90 treatment targets and in these countries 73% of people living with HIV have an undetectable viral load, which not only maintains the health of the person living with HIV but also prevents onwards transmission of HIV to others.

The fragile gains that have been made in the AIDS response have led to complacency and shifts in financing priorities are threatening to reverse these gains.

“We cannot treat ourselves out of this epidemic . We must increase our spending on HIV prevention. Quality, localized services, using local people are key factors in delivering relevant, effective solutions for the AIDS response,” says Steve Letsike, Chairperson of the South African National AIDS Council’s Civil Society Forum.

Globally, external donor funding for the AIDS response is stagnating. In 2017, it amounted to USD 8.1 billion, similar to levels of investment in 2008 (USD 7.8 million).  In Eastern and Southern Africa, available resources for AIDS financing reached USD 10.6 billion, 42% of which was provided by domestic resources. UNAIDS estimates that these may be sufficient to reach the Fast-Track targets provided countries to increase efficiencies and effectiveness of spending. In Western and Central Africa, only USD 2.1 billion was available for the AIDS response in 2017, with domestic resources accounting for one-third. This is not sufficient to meet the Fast-Track targets by 2020.

“Shared responsibility and global solidarity means a shift from the concept of ‘charity’ to country ownership of the HIV and health response; from fragmented planning to prioritization of programmes for maximum impact; from unpredictable to sustainable and long-term financing; inclusive governance and leaving no one behind in the AIDS response,” says Catherine Sozi, Director for the UNAIDS Regional Support Team for Eastern and Southern Africa.

At a recent high-level political dialogue convened by the Champions for an AIDS-Free Generation and Joint United Nations Programme on HIV/AIDS (UNAIDS), participants gathered to engage and interrogate this current AIDS financing environment and discuss options for building sustainable domestic investments for not only the AIDS response, but also the sexual and reproductive and sexual and gender-based violence responses in the African region.

“AIDS remains our priority because keeping our people alive is our priority,” says Festus Moage, Chairperson of the AIDS-Free Generation.

More in this category: « According to young people: six ways to eliminate violence against women and children This World AIDS Day, knowledge is power »
back to top