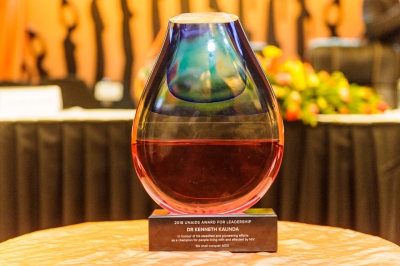 Kenneth David Kaunda’s decades-long leadership in the AIDS response in Zambia and in Africa is being recognized by the Joint United Nations Programme on HIV/AIDS (UNAIDS) and the Champions for an AIDS-Free Generation.

Lusaka/ZAMBIA, 11 May 2018—The President of Zambia, Edgar Chagwa Lungu, together with the UNAIDS Executive Director, Michel Sidibé, today presented the 2018 UNAIDS Leadership Award to First President of the Republic of Zambia and Champion for an AIDS-Free Generation, Kenneth David Kaunda. The award ceremony was attended by three of the Champions for an AIDS-Free Generation: Hifikepunye Pohamba, former President of Namibia, Specioza Wandira-Kazibwe, former Vice-President of Uganda and Miriam Were, Chancellor of Moi University in Kenya.

The UNAIDS Leadership Award is given to high-level personalities who have made outstanding contributions to the AIDS response in the course of their professional and personal life. The award has been previously presented to Kofi Annan, former United Nations Secretary-General, and the First Lady of China, Peng Luang.

“Leadership requires courage, humility, integrity, humanity and compassion. Kenneth Kaunda has all of these qualities and more. He led Zambia to freedom and independence. He has completely changed the face of the AIDS epidemic by speaking out against stigma and discrimination, by using his voice to talk about HIV wherever he is,” said Mr Sidibé.

Mr Kaunda is well-known for his rejection of complacency and silence with regard to HIV. The death Mr Kaunda’s son in 1986 prompted Mr Kaunda to take a stand against HIV across Africa and since he has been a fierce advocate for ending HIV-related stigma and discrimination. A few weeks after his son died, Mr Kaunda publicly announced that his son’s death was the result of complications due to AIDS. At 94, he continues to urge his people to unite towards Ending AIDS as a public health threat by 2030.

“This award is a truly heart-strengthening gift. But it is too great to bear alone. I therefore dedicate this award to all the Zambians who have lost their lives to AIDS. To all those fighting AIDS. To all those who have a personal commitment to Ending AIDS. No one must be left behind if we are to win. Count me in,” said Mr Kaunda.

Mr Kaunda has been a vocal advocate of the Zambia chapter of the Brothers for Life campaign. He has demonstrated a strong commitment towards achieving the UNAIDS 90–90–90 targets: ensuring that by 2020, 90% of Zambians living with HIV know their HIV status; 90% of people who know their HIV status are on HIV treatment; and 90% of people on HIV treatment have achieved viral load suppression. Mr Kaunda has on a number of occasions tested for HIV publicly, in order to show the importance of knowing one’s HIV status and should it be necessary, being able to access HIV treatment in order to lead a healthy life.

“This award is only given to those who have taken part in the AIDS response and deserve recognition. Dr Kaunda used the painful tragedy of losing his own son to talk about AIDS. By doing so he succeeded in challenging stigma. So we have succeeded because he succeeded. We share his success. He inspires us,” said President Lungu.

Mr Kaunda is one of the first members to join the of the Champions for an AIDS-Free Generation, comprising former African Heads of State and other influential African leaders, in September 2008. These influential and independent leaders consider a robust AIDS response in Africa a critical part of their legacy. The Champions, individually and collectively, provide a unique resource to mobilize political leadership to deliver on an AIDS-free generation in Africa. The Champions group is chaired by former President of Botswana, Festus Mogae. Mr Kaunda is the Vice-Chairperson.

More in this category: « UNAIDS Executive Director puts the spotlight on the HIV response in Lesotho, South Africa and Zambia during five-day visit UNAIDS Eastern and Southern Africa sessions at IAS 2018 »
back to top