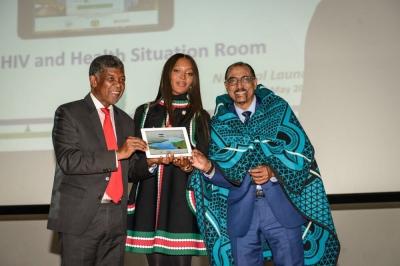 UNAIDS Executive Director puts the spotlight on the HIV response in Lesotho, South Africa and Zambia during five-day visit

UNAIDS Executive Director, Michel Sidibé, completed a five-day visit to three countries in southern Africa. The mission included high-level political discussions, the launch of the Lesotho HIV Health and Situation Room and frank and an open dialogue with women activists about how to address sexual harassment and abuse.

Beginning in Lesotho, Mr Sidibé attended the launch of the HIV Health and Situation Room with the Deputy Prime Minister, Monyane Moleleki. Special guest Naomi Campbell was invited by UNAIDS to join the two-day country visit to learn more about the HIV response.

The Lesotho HIV and Health Situation room shows real-time service delivery data, producing a comprehensive picture and understanding of Lesotho’s HIV epidemic. It enables quick feedback on results at the national and community levels and identifies bottlenecks in access to health-care services.

“The launch of the Lesotho HIV and Health situation room gives us access to data to shape impactful and efficient health programmes. These are the kind of innovations that will bring services to those who need them most and ensure that no one is left behind by the AIDS response,” said Michel Sidibé, the UNAIDS Executive Director.

On the eve of the launch, Mr Sidibé and Ms Campbell visited the Queen II hospital in Maseru and met with young women living with HIV and others affected by the epidemic.

“I commend the Government of Lesotho and its partners for the progress made in the AIDS response. But the work is far from done. The reality is that we are not reaching adolescent girls and young women. I leave Lesotho today empowered, inspired, encouraged and determined to do all I can to highlight this critical issue,” said Ms Campbell.

In South Africa, Mr Sidibé addressed the Pan African Parliament and underlined the importance of integrated health approaches that were people centred. He urged parliamentarians to commit more domestic funding for health services to increase the sustainability of the AIDS response and to put in place more preventative measures to improve people’s health. In addition, he called for laws to protect women and vulnerable groups.

Mr Sidibé left the parliamentary session to meet civil society activists concerned by UNAIDS response to allegations of sexual harassment and abuse in the organization.

At a follow up meeting the next day, Mr Sidibé and women activists met to discuss their concerns.

Mr Sidibé agreed with activists to issue a statement following the meeting. The statement begins:

‘During my recent visit to South Africa, I listened carefully to you, I heard you. The HIV epidemic is inextricably linked to sexual and gender-based violence and the two can never be separated. We need the passion of advocates to move issues forward.`

During his visit to South Africa, Mr Sidibé held separate meetings with President Cyril Ramaphosa, Deputy President and SANAC Chair, David Mabuza, and the Minister of Health, Aaron Motsoaledi. They discussed plans to increase the number of people on treatment by two million by 2020 and the need to empower local and provincial authorities to bring treatment and prevention services closer to vulnerable communities.

The last leg of Mr Sidibé’s visit saw him arrive in Lusaka, Zambia, to confer the 2018 UNAIDS Leadership Award upon Dr Kenneth Kuanda for his efforts in strengthening the AIDS response.

More in this category: « UNAIDS Executive Director Letter to Partners Kenneth David Kaunda receives the 2018 UNAIDS Leadership Award for his contribution to the AIDS response »
back to top