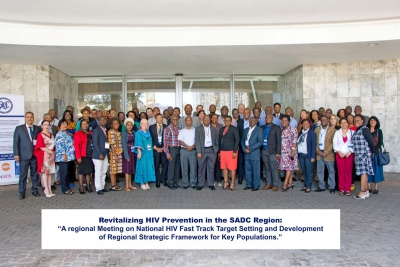 In 2016 there were approximately 19 million people living with HIV in eastern and southern Africa (ESA), with adolescent girls and young women accounting for almost 60% of adults over 15 years. Compared to other regions, ESA made the greatest progress in reducing new HIV infections among adults between 2010 and 2016, to an estimated 790 000, but this decline is too slow to meet the High Level Meeting’s Political Declaration target of 210 000 new HIV infections by 2020.

Thus, since 2015, the Regional Directors of the Joint United Nations Programme on HIV/AIDS (UNAIDS) and United Nations Population Fund (UNFPA) have led a major push in the ESA region, championed by the Minister of Health in Zimbabwe, David Parirenyatwa, to revitalise HIV prevention efforts along five high-impact pillars: 1) scaling up combination prevention packages and access to sexual and reproductive health services for young men, adolescent girls and young women and their male partners; 2) scaling up evidence and human rights-based prevention programmes for key populations—that is, sex workers, gay men and other men who have sex with men and people who inject drugs; 3) strengthening national condom programming; 4) expanding provision of voluntary male medical circumcision; and 5) rapid incorporation of pre-exposure prophylaxis.

Many countries in the ESA region have already held national consultations to identify bottlenecks in the process of target-setting for the HIV prevention agenda. To support this process even further, UNAIDS Regional Support Team (RST) for Eastern and Southern Africa (ESA), United Nations Population Fund and United Nations Development Fund, in partnership with the Southern African Development Community (SADC), organized a two-day meeting in early October 2017 to endorse the SADC strategy on key populations and finalise prevention target-setting guidance for SADC member states.

At the meeting, SADC member state technical teams agreed to propose the Regional Key Population Strategy to SADC Health Ministers for their endorsement in their November 2017 and also endorsed the issuance of guidance for HIV prevention target setting, aligned with the High Level Meeting Political Declaration targets and in line with the Global Prevention Roadmap. They agreed on a time bound roadmap to set and refine targets, and scale up HIV prevention programmes aligned to Political Declaration commitments.

"We have to be bold and focused in Fast-Tracking the AIDS response to ensure that the desire of Ending AIDS by 2030 is realized and does not remain solely a desire."
CATHERINE SOZI, DIRECTOR, UNAIDS REGIONAL SUPPORT TEAM FOR EASTERN AND SOUTHERN AFRICA

“Revitalizing HIV prevention is essential for essential for making sure no one is left behind by the AIDS response."
CHAIR OF MEETING, SOUTH AFRICA

“We need to focus on educating young girls and empowering them to protect themselves from HIV."
MEMBER OF CIVIL SOCIETY, MALAWI

More in this category: « “Art is very important in disseminating information about HIV” African Parliamentarians renew commitment to Ending AIDS »
back to top