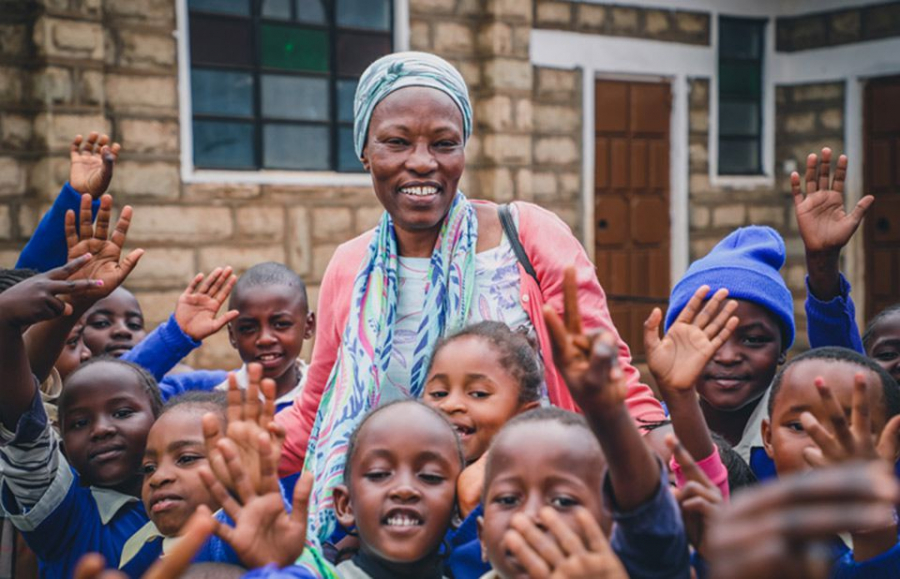 “Peace is not merely the absence of war—it is when people have access to resources that enable them to meet their basic needs so they can live their life with dignity. If people have no nutritious food, if children do not go to school, if there is a conflict, then they are not at peace. COVID-19 came to remind us about it,” said Karambu Ringera, the founder and President of the International Peace Initiatives in Kenya.

Ms Ringera says that peace is holistic—even though her organization focuses on women living with HIV and AIDS-related orphans, she believes that it is also working for peace.

Her work started back in the early 2000s, when Ms Ringera was a student in the United States of America. When she returned to her home town in Kenya, Meru, for the summer holidays, she met a group of women, some of whom had recently lost their husbands. Most of the women didn’t know the cause of death of their husbands, but since AIDS-related deaths in Kenya were at their peak then, Ms Ringera suspected the reason. She encouraged the women to find out their own HIV status so as to not follow in their husbands’ footsteps.

Moved by the plight of many of the women she met, many of whom couldn’t afford to send their children to school or access HIV treatment, when back in the United States Ms Ringera arranged a cultural event, at which Kenyan food was served and people could learn about African culture. She collected US$ 400—enough to send seven children to school.

“I love the proverb about not just giving a person a fish, but teaching them how to fish,” she said. She wanted to help more children at home in Kenya, but, said Ms Ringera, “I wanted to go beyond just being someone who came to study poor women, create a solution for them and ask them to implement it.” For her, it was important for the women to understand that they could help themselves.

The women decided that they would make jewellery, which could be sold at her cultural fundraising events. At the same time, women started developing more skills, such as weaving and catering, so they could start their own businesses and support themselves.

Nearly two decades later, Ms Ringera runs a nongovernment organization that provides sustainable initiatives for orphans, women living with HIV, survivors of violence and communities with the tools and resources they need to move on from violence, poverty and crisis to stability and self-reliance.

In the beginning, many of the women who work at the International Peace Initiatives couldn’t afford a US$ 3 school uniform for their children. Today, Ms Ringera is proud that many have put their children through university. “People even in vulnerable circumstances can transform their lives. We have women and children, young people, to show that this is possible. We need to create interventions that inspire people to save themselves,” she said.

In the time of COVID-19, though, Ms Ringera is worried.

“We will need a good strategy to survive as a family,” she said. “Since 2009, when our children’s home was opened, this is the first time that we closed its doors to visitors. We did this immediately after hearing the news about the new coronavirus.”

The children’s home is home to 76 children, who need to be fed three times a day. Ms Ringera thinks that sustainability is key—Ms Ringera and her team are planting crops, keeping chickens and trying to collect a store of food for at least three months. “I feel that more and more, people need to create their own sustainable systems where they are, so that during challenges like this, at least they can have their own food locally,” she said.

More in this category: « United Nations in South Africa launches US$ 136 million COVID-19 flash appeal Living with HIV under lockdown »
back to top