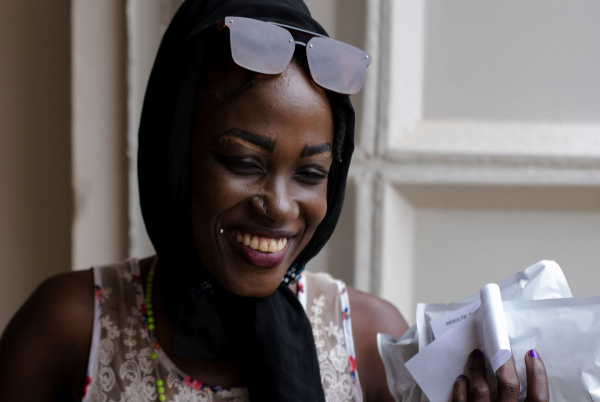 My name is Sandriano, AKA Rasta Pussy. I stay in Mukono, Uganda. I have two kids; a Danish boy who is 9 years old and an Indian daughter who is five. This Indian man was the one who taught me heroin, but we divorced. What is paining me is that the man spoilt my life.

My family, everything. I was stealing from them, of course, and I was in jail for a year and three months for possession of marijuana.

I tried to behave myself because of what I saw there but I couldn’t.

Last Friday I was feeling bad because I tried to reduce my intake. I don’t smoke during the day; only at night because I need to get money. Friday, when it came to around 19.00, I started to feel bad. I reached the streets and it was raining.

We went to the lodge, we put on a condom and we started having sex. Then after a while he wanted to take off the condom. I told him to add money and he added another 5k.

When he added the 5k, he became forceful. I said, “I have a habit you can’t just do it like that with no condom.” He got upset. “But this is what we negotiated!” he shouted at me.

He gave me a first slap and said, “Give me back my money.” I said no, you have already had sex with me. He gave me a second slap. Then he started slapping me seriously.

He made my eye like this. Even my finger, he almost broke it. I was holding the money tight and he was trying to get it out of my hand.

By the time I ran to the door and got it open, all the guys from the rooms were outside. I think they wanted to break that door. But the good thing is I got my money.

You think that if I wasn’t taking this stuff, this would’ve happened? I’m tired of this drug. Do you think if I wasn’t smoking, I would let any man come and have sex with me and give me 20, 30, 50k just like that?

These men they come to me because I am an addict.

I have the hope that I can stop. I even went to rehab for three months. They gave me CPZ (Chlorpromazine, an antipsychotic medication). When I saw my days of rehab coming to an end, I saw no plan and I started again.

I am ready to go to rehab again, but when I come out, I don’t want to be idle.

When they take us out of rehab, we need a job. They can say to us, “Work in a supermarket, work in this shop so you can stabilize.”

I am 24 years old. Can you believe I don’t even get my period? With this stuff you don’t get it until you stop using it. Today I came here [the Uganda Harm Reduction Network] to get a test for HIV. I am negative.

What is paining me is I don’t want to get infected; you know. I still want to get married later.

More in this category: Stephen Watiti: a personal journey that imprints on others »
back to top