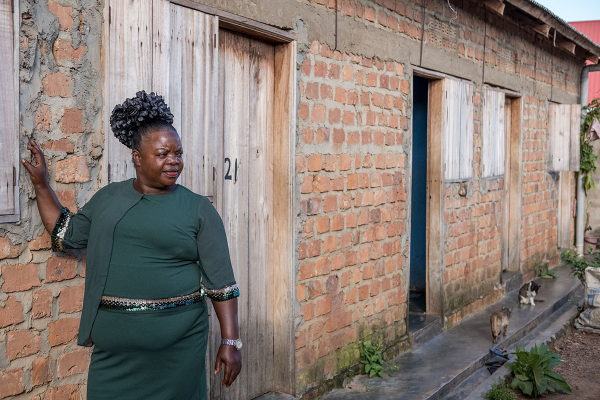 My name is Hope Harriet Waseni. My working name is Cindy. Formerly I was a sex worker; nowadays I no longer go to the landing sites. I stopped last year. My organization is called Justice and Economic Empowerment for Women and Girls Foundation. I started it because most of the sex worker organizations are in Kampala and they don’t reach the landing sites.

I started sex work when I was nine years old. My mother passed away and left me with my father. He went on to marry different women and left me in the house with my younger siblings. I could not take care of them.

One day, one of my friends came to my house and took me to the streets.

When I had my first client, I was still a virgin. It was sex without a condom. That is how I contracted HIV. I didn’t know for a long time that I had HIV.

I was tested in 2003.They counselled me, and I went on HIV treatment. Until today I take my medication and I am healthy.

One day a client took advantage of me. The person who got me into sex work told me never, ever to go with a man outside the street. Be with a man in the lodge. But by then I thought I was experienced in my work.

I met him in a bar. He took me to his home; he had already prepared his friends, about eight of them. They raped me.

The most challenging thing sex workers face is the gender-based violence around the landing sites.

After bargaining with a client for sex you find that before doing the payment, he grabs you and begins fighting you as if he wants to rape you, as if he doesn’t want to pay you.

Even after you tell him, “Please, sex is in exchange for money; you give me money, I give you sex,” he will tell you, “God gave you that organ for free, why would you charge me for sex?”

Then he says, fine, but charge me very little money. But you are supposed to charge according to how much the room costs per day. The room costs UGX10 000 (about USD2.50).

If you charge UGX2 000 per client, how many men are you going to have to sleep with to collect UGX10 00 to give to the lodge owner?

Most of the girls here have been raped; forced into sex for free. Sometimes they are forced to have sex without a condom, even when condoms are there. Some are being beaten up. Even some are being killed.

Yesterday, we buried a sex worker who was stabbed to death by a client

The clients here are not informed, even the sex workers. Clients in Kampala, they know that they will have sex with the sex worker and she will be paid.

We need more training for sex workers and the clients. If we have a training here at the landing site; the clients will come. When they are informed that sex workers are also human beings, that they are not supposed to be tortured and that sex is sold for money, they will say, “Hey, okay!”

The next time they come they understand that these are mothers and they must earn money for their children back home.

So, when they come, they come knowing to come here with money and to have sex with a condom.

More in this category: « Stephen Watiti: a personal journey that imprints on others TSEBO MAKAKOLE »
back to top