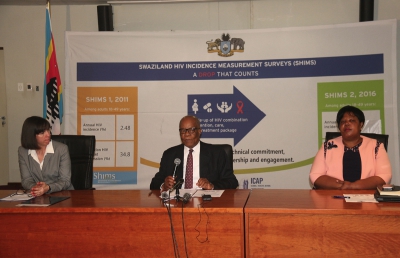 Swaziland has achieved a 71% viral load suppression among adults living with HIV and a major reduction in new HIV infections.

According to the recent 2016 Swaziland HIV Incidence Measurement Survey (SHIMS), released in late July, the country achieved an increase from 34.8% to 71.3% in viral load suppression among people living with HIV on antiretroviral treatment (ART) between the ages of 18 and 49.

In 2011, Swaziland rapidly scaled up HIV prevention and treatment interventions such as ART, voluntary medical male circumcision, HIV counselling and testing and prevention of mother-to-child HIV transmission. Barnabas Sibusiso Dlamini, Prime Minister of Swaziland, has attributed these results to this massive scale up of the country’s AIDS response.

During the launch of the results at the Swaziland Cabinet offices, Mr Dlamini acknowledged support from development partners, particularly the UN family, Global Fund, PEPFAR, the Clinton Health Access Initiative, the Centre for Disease Control (CDC) and the International Centre for AIDS Care and Treatment Programs (ICAP).

This major achievement puts Swaziland on the map to achieve the UNAIDS 90-90-90 treatment targets by 2020 and end the AIDS epidemic as a public health threat by 2030.

“The SHIMS 2 statistics are enormously encouraging and a fitting tribute to the political leadership at the highest level, to the structured and systematic national planning and coordination, our generously supportive development partners, the dedicated health workers at the frontline of service delivery, our community leaders and a committed nation of determined citizens. That is the team. And, as in any team activity, all must pull their weight and share both the responsibility and, as today, the credit.”
Barnabas Sibusiso Dlamini, Prime Minister, Swaziland

"UNAIDS congratulates the Government of Swaziland and all of its partners on this tremendous achievement. We reaffirm our support to the country to continue to push forward on the Fast-Track to ending the AIDS epidemic as a public health threat by 2030. Swaziland will show the world it can be done."
Tim Musinguzi, UNAIDS Country Director, Swaziland

More in this category: « Zambia leaves no one behind in approach to HIV testing and treatment Botswana: Taking action for sustainable development »
back to top