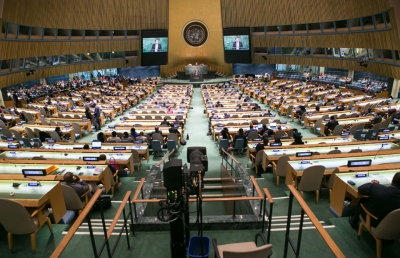 The 2016 United Nations General Assembly High-Level Meeting on Ending AIDS, taking place 8–10 June in New York, comes at a critical moment in the history of the HIV epidemic and response. The meeting builds on the adoption of the Sustainable Development Goals and the commitment to ending the AIDS epidemic as a public health threat by 2030.

The Political Declaration adopted at the meeting will guide and monitor the global AIDS response towards ending the AIDS epidemic by 2030. The co-facilitators, Switzerland and Zambia, have released the zero draft of the 2016 Political Declaration: on the Fast-Track to end AIDS in the age of sustainable development. The zero draft was presented to United Nations Member States on 18 April and the co-facilitators have begun open, transparent and inclusive informal consultations on the draft declaration on 25 April. The negotiation process continues until the declaration’s presentation for adoption on 8 June.

In this context, the Tanzania Commission on HIV/AIDS (TACAIDS) and UNAIDS convened a national multi-stakeholder consultation bringing together over 50 representatives from across government, civil society, private sector, academia, development partners, media and affected communities from the mainland and Zanzibar. The purpose of the meeting was to discuss and provide feedback on the zero draft Political Declaration and generate shared understanding of national epidemic priorities, opportunities and challenges of new context and how to accelerate progress towards ending AIDS by 2030. The meeting took place on 24 May 2016.

Participants discussed the main priorities which Tanzania would want to see included in the declaration. These include increase of domestic financing, expansion of comprehensive health services and information to remote areas, commitment to the 90-90-90 targets, new service delivery models, effective community engagement, the need to address punitive laws and policies blocking access to services for key populations and young people, systematising peer reviews across the region, local manufacturing of essential medicines and availability and quality of data (especially on adolescents and young adults).

The importance of translating the Political Declaration into local policies and programmes at the country level was emphasized, as well as the importance of understanding and highlighting what is new in this declaration since the previous one adopted in 2011.

“The government applauds the work done on drafting the declaration. The translation of such global policies at local level will be key going forward. This government is committed to ensure universal health coverage for all its citizens.”

“To end AIDS, international cooperation should be emphasized. We cannot avoid economic realities where we are discussing health care coverage.”

More in this category: « Engaging men in the AIDS response
back to top