“I also need to be happy”: Anna Morena’s story 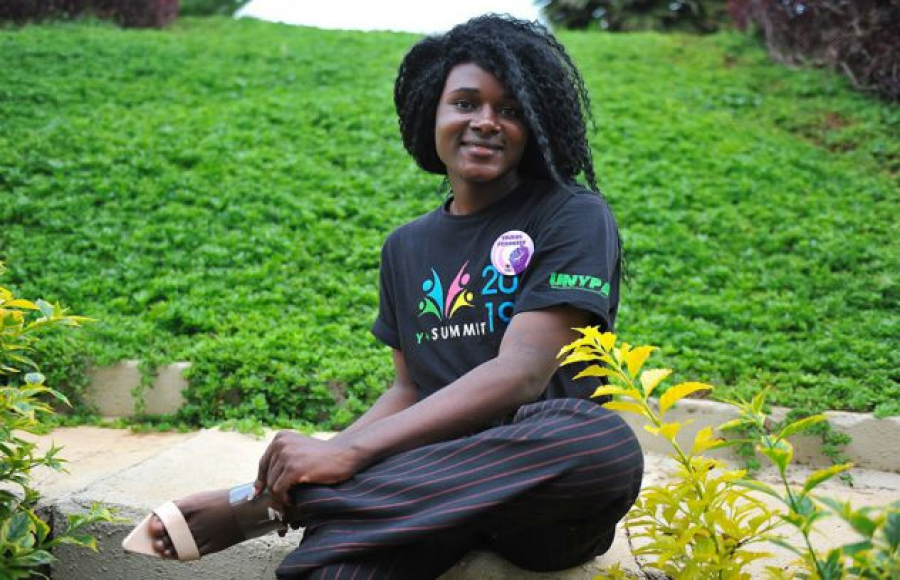 Officially, she calls herself Juliana, but she also goes by the name Anna Morena and has an organization of the same name—the Anna Foundation Uganda.

As a response to the malnutrition experienced by transgender people because of the COVID-19 outbreak, the foundation has raised US$ 1600 from a private donor to support transgender people and their dependents with food relief, which has reached more than 200 people.

Members of the foundation volunteer their time to conduct referrals for mental health and supply medical services, including deliveries of treatment and hormone therapy to transgender people who cannot currently access facilities due to the COVID-19 pandemic.

Ms Morena named herself and the foundation in memory of a friend who moved to Kampala, the capital of Uganda, at the age of 16 years. She was working as a sex worker to survive, met a man in a nightclub one night and was found dead the next day.

“I thought that maybe I could be “Anna” too, because she had a dream—to live as a normal person,” said Ms Morena wistfully.

Ms Morena doesn’t like labels, but she refers to herself as a “trans girl” because she wants people to know that she’s “not just a sex worker.”

She is open about being a sex worker so she can encourage others to come out and speak about it. She also volunteers to educate people about being transgender, which she does “out of love.” The sex work is to put food on the table.

“Most of the trans women I know are doing sex work. They are usually between the ages of 16 and 25 years, a time when hormones are high and one’s understanding of sexuality and gender identity is still developing,” she said.

In their daily lives, transgender people experience exclusion from family and society, barriers to employment and extreme forms of sexual, physical, emotional and psychological violence. According to Ms Morena, the COVID-19 pandemic is making things worse.

“COVID-19 has led to an increase in gender-based violence and a scarcity in commodities such as condoms and lubricants. Most sex workers are still doing sex work so that they can survive and we are seeing a rise in infections,” said Ms Morena.

She said prices for essentials such as mobile phone data have risen, making it harder for community-based transgender organizations to stay connected to their members.

In the absence of funding for vocational training, the only choice for transgender people who want to make a difference is to volunteer, said Ms Morena, because there is limited donor funding for transgender organizations. “Donors are very specific about what they will support, meaning there is a lot of competition for funding,” she said.

In addition, there is limited data on transgender people in the eastern and southern African region and Ms Morena believes that donors are not primarily interested in funding community-led research. But, she said, research is critical. “It is a way to help our governments understand the specific needs we have; it helps influence change and policies.”

Influencing change is something that Ms Morena does every day. During workshops run by the foundation, in partnership with other transgender and female-led community organizations, she tries to educate people about what it feels like to live in a transgender body by getting them to draw a picture of their bodies on a piece of paper they place on top of their heads.

Drawing one’s body out of sight always guarantees that it comes out a mess. This is Ms Morena’s advocacy punchline.

She holds up the drawing and tells them, “This is the pain I have to go through daily. This is how the world sees a transgender person.”

“This is not the body I want. I want to transition, but I don’t have the support of my family. I honestly love them. At times I try to do what I can to make them comfortable, but I also need to be happy,” she said.

This is the reason why the transgender community is so important, said Ms Morena. Solidarity helps.

“Trans women need safe spaces, places to stay and access to mental health services,” said Ms Morena. “The Government of Uganda is not willing to facilitate such spaces, so community-based organizations must bring these services until the fight for decriminalization has been won.”

More in this category: « Talking about a revolution The impact of COVID-19 on social justice, human rights, and gender-based violence in the SADC region: lessons from the HIV response »
back to top