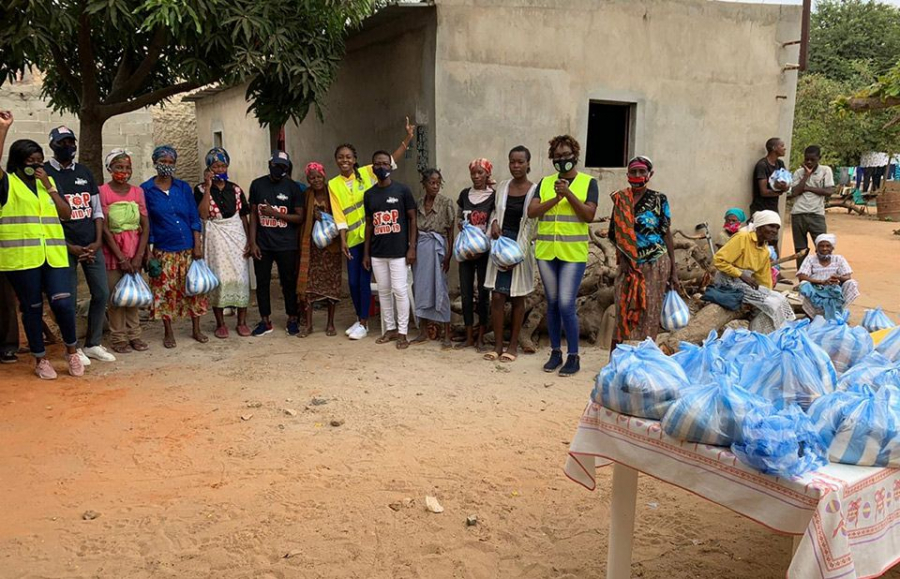 “Angola has a long history of epidemic outbreaks,” said Michel Kouakou, UNAIDS Country Director for Angola. “From cholera, malaria, polio and yellow fever, the country is well prepared and has competent people to deal with outbreaks, including health-care workers,” he said.

As a result, the President of Angola, João Lourenço, took immediate steps early in the COVID-19 outbreak, including a nationwide lockdown, closure of the border and cessation of international flights.

While this had the effect of keeping new COVID-19 cases low, it caused many people to lose their livelihoods, especially people who work in the informal sector.

To respond to the food insecurity that this caused, especially among people living with HIV, the UNAIDS Country Office for Angola leveraged its partnerships to reach thousands of people in Luanda, the capital city of Angola, with food baskets.

Under the auspices of her Free to Shine campaign, which focuses on the elimination of mother-to-child transmission of HIV in Angola, the First Lady of Angola, Ana Afonso Dias Lourenço, in partnership with the Saham Angola Insurance Company, the Association of HIV-Positive People and UNAIDS, distributed 1000 food baskets to people living with HIV, 500 of which were given to pregnant women living with HIV.

As the lockdown proceeded, Yola Semedo, a popular Angolan singer and songwriter and a UNAIDS National Goodwill Ambassador, arranged a virtual concert, which was televised on national television. She raised funds for an additional 14 000 food baskets, which she distributed in Luanda and Benguela provinces, including 500 food baskets for people living with HIV in Luanda.

“Our people are vulnerable due to COVID-19 and at this time I feel very happy to be a daughter of this land. It is at this time that we realize that ours are here with us,” said Ms Semedo.

A long-standing civil society partner of UNAIDS, the Angola Network of AIDS Service Organizations, which supports people and families living with HIV, has distributed 1500 food baskets, and the numbers are growing as more are distributed every day.

The Association of Policewomen in Angola also joined the movement and donated 120 food baskets to the faith-based organization Associação de Solidariedade Cristã e Ajuda Mútua in order for them to distribute the packs to female sex workers, who have experienced a loss of income owing to the COVID-19 pandemic.

“While many countries in the region have used lockdown as an excuse to further criminalize key populations, including sex workers, this action has shown that solidarity is key during this time,” said Mr Kouakou.

More in this category: “We are in this together”: Uganda Young Positives respond to COVID-19 »
back to top